Languedoc-Roussillon is one of the most varied landscapes in France with its high mountains (over 2500 meters above sea-level), its plains and beaches.
The coastal stretch Côte Vermeille — considered by many to be the most beautiful part of the French Mediterranean coastline — is approximately 19 miles long and reaches from Argelés sur Mer in the north past Collioure, Port Vendres, Banyus sur Mer and Cerbère to the Spanish border in the south. It has gotten its name from the cliffs which in warm, red tones descend into the deep blue Mediterranean with its many coves that offer swimming, diving and water sports. Above lovely stone houses, colourful boats, lush greenery and splendorous flowers the endless vineyards reach up into the Pyrenées and its soft hills, merging into impressive mountain peaks — a fantastic wilderness to behold.
The mild climate, the warm and sunny weather gave rise to the nickname "The Garden of France." You will find wonderful plantations of flowers, fruit orchards such as cherry, apple, plum, peach, fig, apricot, kiwi, nectarine and almond tree. The area is also known for its special, complex, sweet wines. Additionally, excellent dry wines are produced here which are fresh, light and bear a distinct touch of the sea along with the surrounding environ's spices and cedar. The majority of the wineries offer wine tasting on the farms or in "les caves" — wine boutiques in the middle of the village. Within a few miles of L'abri la Vall you will find a number of vineyards. You need only knock on the door to have a taste!

There are many picturesque mountain villages in the region. After a car-ride of about an hour and a half you will reach among others the medieval city of Carcassonne with its ring wall. Céret and the health resort Amélie-les-Bains with its thermal baths is only 45 minutes away.
Carcassonne

The environ also has many medieval gothic castles and convents to explore.

The Pyrenées have 8 nice ski resorts approximately two hours from La Vall. After 20-50 minutes by car you will find golf courses, both in France and in Spain.

Enormous sand-beaches are just 20 minutes away from L'abri la Vall, if you prefer this instead of unique, solitary cliff-coves a little further south. 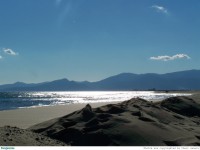 Sorède, our closest neighboring village, is a lively Catalan village at the foot of the massif Albères. This enchanting village has five restaurants, bakeries, a bank, post office and tourist center. A local market is held twice per week where you can buy fresh produce from the surrounding farms and vineyards. Sorède has many adjacent attractions, such as a turtle zoo and the famous Eagles of Chateau Valmy. The area also offers riding, tennis, canoeing and several other water-sports. On the outskirts of Sorède you can enjoy enchanting promenades and bike paths, cool rivers to swim in, and awe-inspiring mountains to hike on. 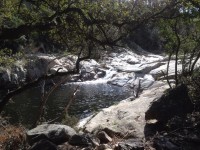 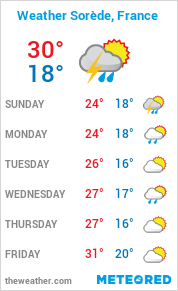 The area where the Pyrenees meet the Mediterranean is among the sunniest and warmest parts of France with about 300 days of sunshine / year.

The summer (May-September) is warm and dry and the safest period for sun and swimming, while the winter (January-February) has more rainfall and is the coldest, even if the temperature seldom drops below +5°

Even October is warm and pleasant, despite the highest risk of rain.

In March and April the weather is unstable, and everything from rainy spells to summer days with summer temperatures can happen.

November and December are cooler, but the days are sunny and quite warm.